What’s not to love about Oakhurst?

All these words could be used to describe the Oakhurst neighborhood. Its affordability and location have attracted a melting pot of people over the years, and now it is one of the last great neighborhoods close to Uptown that remains affordable. 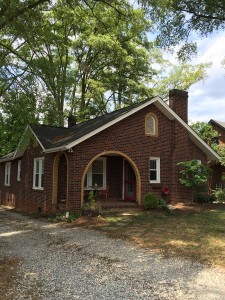 A charming brick home in Oakhurst.

Oakhurst is  bordered by Independence Boulevard, Sharon Amity and Commonwealth Avenue. The majority of  homes is northeast of Monroe Road, but the neighborhood does extend across Monroe Road.

The great thing about Oakhurst right now is that many of the homes need some TLC, so it is likely you can find a great deal on a diamond in the rough. Think about Chantilly 15 years ago; Oakhurst has that potential and a great location.

Already there are half-million dollar homes in Moderna, a separate subdivision within Oakhurst boundaries, and the area is attracting new mixed-use developments, such as Meridien Place near Idlewild.

It is convenient – 10 minutes – from most of the go-to places in town like Uptown, South End, NoDa, Plaza Midwood, Myers Park and Dilworth.

Oakhurst homes were built primarily in the 1950s. There are some from the 1940s and 1960s. Many of the homes are ranches and are brick or clapboard siding. The homes tend to run on the smaller side – less than 1,000 square feet to about 1,500 square feet.

Currently, there are only 7 homes on the market in Oakhurst and all but 2 are under contract, as of Feb. 17. An average of 2.8 homes sold per month during the last 12 months, which puts current inventory at 2.8 months. Charlotte and Mecklenburg County each has approximately 3.6 months of inventory.

Thirty-four homes sold in the neighborhood during the last 12 months for an average sales price of $156,034.

The homes listed for sale now range in asking price from $124,900 for an unrenovated, 3-bedroom ranch to $229,000 for a completely renovated 3-bedroom ranch. On average, homes in Oakhurst are selling for 97% of list price; some of the homes sold in the last year went for full list or more than list price.

The market heats up in Spring, but it is already hot in Oakhurst. Get in while the getting is good!