Persistent low inventory did not stop the Charlotte region’s sales from ending on an upswing for December and overall 2016. 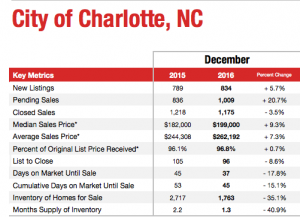 December sales were up 4.5 percent from year-ago figures, while 2016 had an increase of 8.4 percent for closed sales overall, according to the most recent report from the Charlotte Regional Realtor Association.

Low inventory continues in the Charlotte region, however, dropping more than 25 percent from last year. Overall, Charlotte inventory was at a low 2.3 months supply of homes on the market, making for a very strong seller’s market.

“As we move forward into 2017 buyers may face limited choices, faster days on market and rising mortgage rates. However, positive job growth over the last year and a healthy local economy continue to boost consumer spending and housing demand, which should help sales remain steady throughout 2017,” 2017 Carolina MLS President Roger Parham said in a prepared statement.

Market inventory for the city fell to 1,763 homes on the market, a drop of 35 percent. Months of inventory was just 1.3 months, down nearly 41 percent from December 2015.

Inventory fell to only 75 properties listed for sale in December 2016, a drop of more than 30 percent. The Uptown area had 2.5 months of inventory in December, down nearly 36 percent from December 2015.