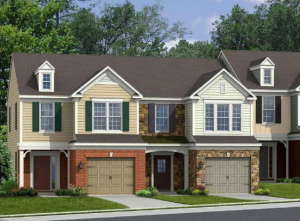 A rendering of the proposed townhomes as submitted to the city by Pulte Homes.

The currently vacant wooded lot is located near the Arrowood Station light stop on the Blue Line light rail. The attached condominiums would sit between South Boulevard and the adjacent Starmount neighborhood.

Current zoning for the property allows for 8 residential units per acre. At nearly 9 acres, Pulte’s plan calls for an increase in population density for the plot.

According to the site plan filed with the city, Pulte would build 2-story attached townhomes with front-load garages. The community, which has yet to be named, would be accessible from a network of private roads.

Charlotte City Council will decide on Pulte’s request in the coming months.