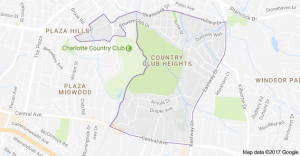 Charlotte’s Country Club Heights is an in-town neighborhood full of character and charming homes built primarily in the 1950s and 1960s.

The neighborhood is convenient to Uptown as well as NoDa and Plaza Midwood, two of the city’s hippest areas of town. Country Club Heights is roughly bordered by Eastway Drive, Central Avenue, Hilliard Drive and Charlotte Country Club to the west.

A mature tree canopy, great homes and a friendly environment are just a few reasons to choose Country Club Heights as your home base.

Located in the heart of the neighborhood is Shamrock Park with its playground, gazebo, tennis court and picnic areas. The neighborhood also has a community garden located along Dunlavin Way. 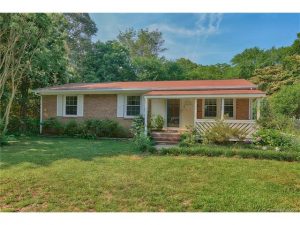 Country Club Heights has a collection of mid-century brick ranches as well as split-level homes and some newer homes being built. Some of the community’s residents have lived there for decades and some are just moving in and lovingly restoring homes and breathing new life with a touch of modernism into these mid-century homes.

As is to be expected with homes built in the mid-1900s, homes are on the smaller side – less than 2,000 square feet in most cases and many less than 1,000 square feet. Lot sizes are great for an in-town location; they range from just under two-tenths of an acre to nearly half an acre.