Cotswold is one of the most popular neighborhoods in Charlotte and for good reason!

It’s an area of town – close to Uptown and South Charlotte – that probably checks every box on your list of desires for a home and community. It’s got character with new and older homes, location, great dining and shopping and some of the city’s best schools!

Cotswold’s borders are formed by Monroe, Wendover, Providence and Sardis/Rama roads. Randolph and Sharon Amity roads are the main roads through the neighborhood.

At the heart of the community is Cotswold Village Shops, which have been in existence since 1963 and have grown to become a shopping and dining destination in Charlotte.

From home in Cotswold, Uptown Charlotte is less than 6 miles away for work, playing or sporting events. SouthPark is just a short 3.5 miles from Cotswold. Interstate access is just a few minutes away via Independence Boulevard (I-74) toward Uptown.

Cotswold’s homes are a mix of newer homes and renovated homes from the 1940s to 1960s and later. You can find a simple brick ranch, a mid-Century modern gem or a magnificent new home reminiscent of stately Myers Park homes.

Prices vary widely depending on the age of home and renovation. Many of the older homes have been updated while keeping the character of the era the homes were built. Original older homes may be less than 2,000 square feet, while new or renovated homes can exceed 5,000 square feet. 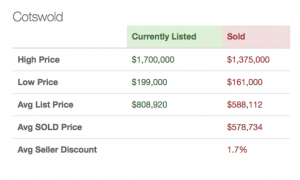 There are currently 39 homes listed for sale in Cotswold as of Jan. 8, which equates to approximately 4 months of market inventory for the neighborhood, given monthly sales numbers for the last year.

Another plus of living in Cotswold is that it is zoned for some of the city’s best schools. Neighborhood children currently attend Cotswold Elementary School, Alexander Graham Middle School and Myers Park High School.