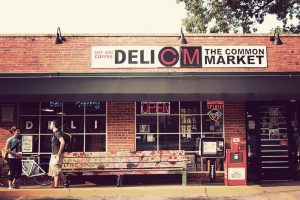 The Common Market, the eclectic deli, general store and community gathering spot, will be opening its third and largest location near Cotswold in Spring.

The 6,500-square-foot space will be located at 4420 Monroe Road near the Oakhurst and Cotswold neighborhoods across from Commonwealth Avenue. The store will be known as Common Market OakWold to reflect its proximity to both neighborhoods.

The newest space will include the usual deli and retail oddities as well as coffee, beer, wine and prepared foods from its full kitchen.

A community meeting planned for Monday, Feb. 6, at Clayworks will collect ideas from local residents for other things people would like to see the market to offer.

There is also plans in the works for a fourth location on Tremont Avenue that will occupy 7,000 square feet of space to replace its former South End location, which was shuttered to become regional headquarters for Austin, Texas-based Dimensional Fund Advisors.

The new South End site’s opening is planned for early next summer.